The American Political Landscape : Polarization between the Left and Right-wing

During the last few years, with the election of Donald Trump, the US public opinion’s polarization seems to be increasing each year. Thus it’s getting harder for someone that isn’t well informed to identify with one of the two main parties.
But what if this general feeling is only due to the social media algorithms that tend to show people content that they agree with, what if the politicians are not as polarized as one would think. 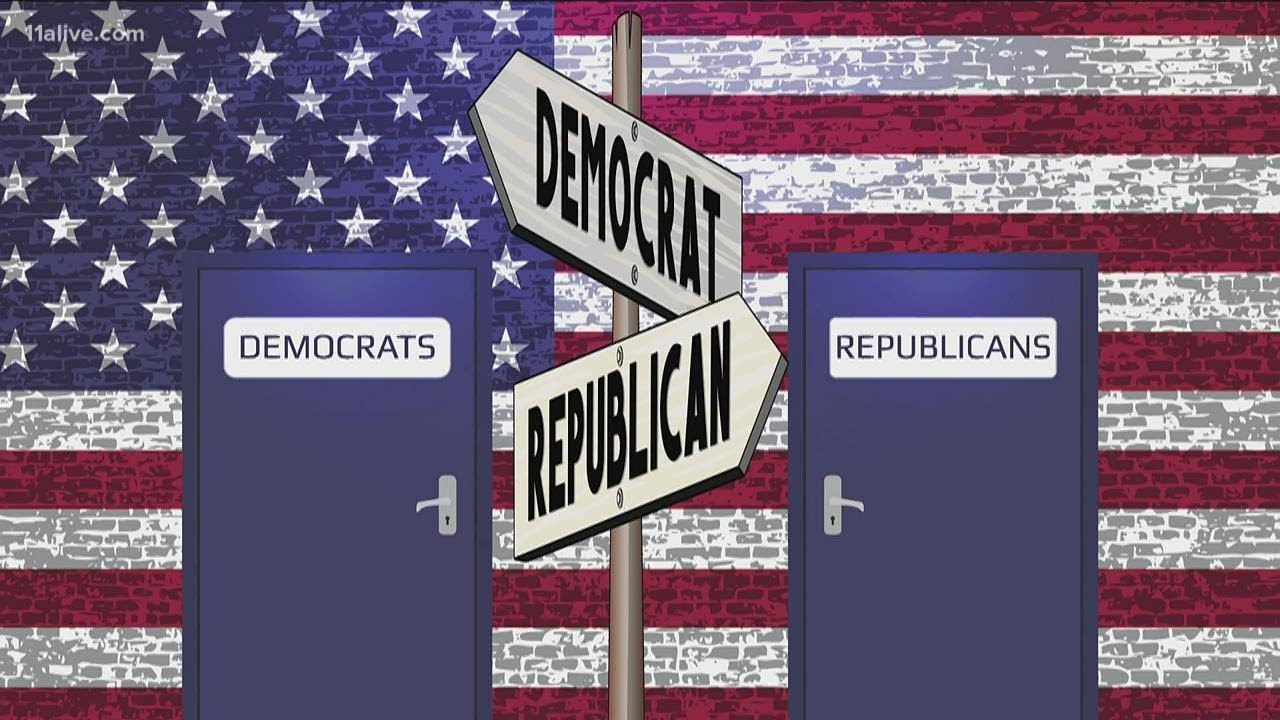 In order to get an idea on how important the US political divide is, we study the difference in politicians’ speeches from the last 5 years. In order to do this, we use the Quotebank dataset to analyse quotes from different politicians. The difference is considered in terms of the importance attributed by each of the Republicans and Democrats to topics that they both discuss, as well as the sentiment they express about those topics.

In 2015, the politicians give the biggest importance to Economic Development. Another economical aspect, the Tax Policy, also comes at high importance as it is considered as the 10th most recurrent topic. On the other hand, Social Problems have a big share of importance as they come 3rd in terms of occurence. We identify the 8th most recurrent topic as the US Values and Institutions, whereas the 11th topic is related to the Foreign Relations.
2016 shows comparable results in terms of importance attributed to the Economy as it comes 2nd in terms of the most occuring topics. *Social Problems, in particular public education, comes as the next important topic (3rd), followed by the Presedential Elections** that happened on the 8th November 2016. **Foreign Relations** comes 9th in terms of importance. Other relevant topics among the top 20 important topics are **Security**(13th), **War**(17th) and **Terrorism**(20th).
The 2017 is also inline with the previous years in terms of the important topics that occur in the politicians speech. In fact, we can identify various Economical subjects such as Economic Development (1st), Tax reforms (6th), Business (13th). We can also identify Social Problems, in particular health system (7th). War and Security is also a recurring important issue as it comes 8th in terms of occurence. Intrestingly, we observe that a new topic Russia shows up among the most important topics. This is related to the Trump elections and the accusation of his proximity to Russia.
In 2018, aside from the recurring subjects, we observe that the **Russia** gains more importance coming 9th. A new topic pops up, Kavanaugh who was nominated by Trump to the Supreme Court. Violence also gains importance and comes 18th in terms of occurence.
2019 year is marked by the Mueller investigation and the Trump impeachment. We also see topics regarding Tax policy, Immigration and War and foreing policy .
The year 2020 is particularly marked by the outbreak of the coronavirus pandemic. The usual topic about economy is still in the first place, but the covid now occupies the places 3 and 4, which together form 13% of the quotes. We can also identify US Institutions at the position 5, and values at the position 8.

Here we see the difference in the Vocabulary used between Republicans and Democrats regarding Tax policy.

Economic Development is a core topic that consistently comes out on top in terms of the number of associated quotes. Throughout the years, Democrats have addressed this topic more than Republicans, with this topic constantly appearing in the top position, averaging 9.76% of quotes for Democrats, compared to only 7.82% for Republicans, for whom it appears on average at position 2,4. This is relatively counter-intuitive, since Republicans are often considered to be the most liberal. One would expect them to address these issues more often than Democrats.

Social questions regarding Health and education

This is also a particularly important and redundant topic. The cluster formed includes mostly quotes related to education and health. As a fundamental part of the American political landscape, social issues are often the source of heated conflict and debate, between those who envision a more social and equitable system and those who defend the established system. ObamaCare was a perfect example of this divide. This law, which wanted to provide social protection to Americans, was enacted by Barack Obama, the 44th president of the United States. But, it was precisely reformed, even canceled by his successor Donald Trump. So, let’s see how this database illustrates this cleavage and analyze the importance attached by each political party to these issues.

It appears that Democrats talk much more about social issues than Republicans, with an average of 8.72% versus 7.26%. On average, Democrats place this topic in average at position 3, compared to 4.75 for Republicans. This seems to be consistent with the positioning of the two parties, insofar as the Democrats often have a more social positioning, to the point that Barack Obama was precisely from their party.

Let’s now have a look at the sentiment shown in these quotes. We see that in general, the two parties don’t agree on the social aspect, as they are statistically different for most of the years, except for 2017 and 2018.

During Obama’s presidency, the first words that appear immediately show this interventionist and global positioning of the USA. The most important words in the dataset for this topic are “war, nuclear, Iran”. Indeed, at the time, the USA were involved in the Iran Nuclear Deal and in a war against terrorism.

On the other hand, during Trump’s presidency, there is a reversal of the situation with a more isolationist policy. We are interested in events that are more closely related to the United States, such as immigration with “immigration, immigrant” and there are no foreign countries in the first words. Indeed, the USA got out of the Iran Nuclear Deal, the speakers started talking more about immigration and we even saw the wall (between USA and Mexico) becoming redundant in the quotes.

Let’s turn now to sentiment analysis. In 2015 and 2016, the sentiments studied did not show a statistical difference between the two parties. However, starting in 2017 and for all subsequent years, the two parties’ sentiments on this topic are statistically different. This can be seen as a reaction to Trump’s policies, which were quite the opposite of conventional American foreign policies. It has thus exacerbated the divide between the left and the right.

Sometimes, topics that are quite frequent for a specific year are non-existent for others.

In 2015, cybersecurity made its way into the most quoted topics. This topic managed to place 5th, managing to beat out yet recurring topics such as foreign relations and threats, or then American values. It thus ranked on average in 5th position, with the 4th position for the Democrats (6.6%), and the 5th for the Republicans (6.3%). This topic was thus treated with relatively similar importance between the two parties.

In seeking to explain the presence and particular importance of this topic in 2015, we could immediately make the connection with the Cambridge Analytica affair. This year also rhymes with numerous data leak scandals. Attackers managed to steal the data of several hundred million customers. The most famous one is the one of Anthem, an American health insurance company, where attackers were able to steal the medical and sensitive data of more than 80 million patients. The dangers of data proliferation thus began to be a common topic in the United States in 2015.

In 2018, a new topic appeared related to the nomination of Brett Kavanaugh as Associate Justice of the Supreme Court of the United States. Meanwhile, Kavanaugh was accused of sexual harassment, and his designation at this position created a huge polemic. This topic was important, and occupied the 17th position in number of quotes. Even if this number is not very high, it should be seriously taken into account because it is a very specific event, and this event happened after the mid-year, meaning it would be a much higher quote ratio if it had appeared in january.

Let’s see how this scandal was received at the level of both parties. We see that the difference between the two parties was statistically different, with more positive sentiment among Republicans than Democrats. This makes perfect sense since Trump, who appointed him, was a Republican. It makes sense that his supporters would have supported him in this situation.

The Covid-19 pandemic that appeared in the dataset in 2020 has absolutely nothing to do with the topics that appeared punctually before. For the first time, a one-off topic has slipped to the top position ahead of economic issues, national security issues, etc. It can be seen that both parties treated the topic with about the same importance (12.2% and 12.3%). They also placed it at about the same level of importance in terms of topics (2, 3).

So both parties have given equal importance to this topic, but what about the content? We see that the quotes from the two parties were not statistically different. This could be interpreted as a national unity reaction to a global threat. Perhaps a more detailed dataset would have allowed us to see a distance between the different parties, since covid has become part of our everyday life, and Donald Trump’s management of the pandemic has been severely criticized.

Throughout this study, we analysed the American politician’s quotes in order to represent political polarization. We used the LDA model to discover the dominant topics and identified the most pertinent ones to study.

We were then able to distinguish two types of topics, redundant and ad hoc. For the recurrent ones we analysed the evolution of the sentiments for the two parties through time, as well as the importance accorded to them.

We were thus able to find subjects on which an ideological difference is felt, such as the subjects of economic development or social problems. These topics are more addressed by the Democratic Party, and the sentiment is statistically different.

We also found issues where a sense of national unity helped unite the parties in the face of an external threat. These include the coronavirus pandemic, where the parties were extremely close in their emphasis on the issue.